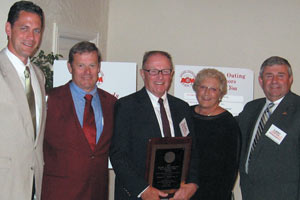 From the ‘News’ pages of the

“Ronnie” MacQuinn became president of the company in the late 1970s, after founder Harold MacQuinn’s retirement, and worked on every significant project the firm undertook, including moving Acadia National Park’s Eagle Lake bridge. That job involved splitting the bridge in two pieces lengthwise and sliding it sideways 15 feet, and was completed without cracking a mortar joint or single stone. MacQuinn’s recent work in the park includes helping rehabilitate its famous carriage trails and 17 stone bridges.

The prestigious award recognizes individuals who have distinguished themselves in the construction industry and unselfishly contributed time, energy and talent to the industry and ACM, according to officials at the organization.

ACM of American is the largest and oldest national construction trade association in the United States, representing more than 35,000 firms. The Maine chapter, established in 1951, represents the interests of more than 275 construction-related businesses in the state.

“Under Ron’s leadership, Harold MacQuinn, Inc. has continued to live up to its reputation as a local heavy-civil contractor with an eye for quality, service and versatility,” said ACM vice president Loren Clarke in presenting the award. He said that in Hancock County, the company’s name is synonymous with quality workmanship and innovation.